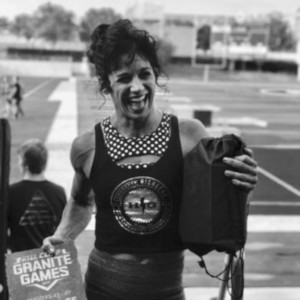 Heidi Bogue has been involved with CrossFit since 2010 when she fell in love with the sport after her first power clean.  She found CrossFit based on the recommendation of two good friends who suggested she give it a try.  After having six children in eight years, she was looking for a way to get back into shape and lose some pounds.  CrossFit delivered on its promise and in just a few months allowed her to drop from a size 10 to a size 2 and be in the best shape of her life.

Her passion for the Sport of Fitness has continued as she has found she also enjoys competing.  Bogue has competed in the CrossFit Masters Qualifier 3 years by placing in the top 100 of over 16,000 athletes worldwide.  Most recently, in 2017, Heidi placed 1st in the Central East Region in the CrossFit Open in her age division ranking in the top 99.9 percentile in the region and top 99.8 percentile worldwide.   Also in 2017, Bogue finished 3rd in The Granite Games in the Open Masters 45-49 Division.  In 2014, Bogue, Coach Tom Karos, and Coach Anna Jones also competed in the Central East Regional Competition as a Team.  In addition to her athletic endeavors, she is experienced in project development and growth, business ownership, marketing, management, event planning as well as coaching.  She has organized and managed large competitions such as Chalk It Up, Cupid’s Revenge, and The Buckeye Games which host over 300 athletes.

She has been an athlete for most of her life focusing primarily on judo in Brazil, where she grew up.  Five years after college graduation and marrying Jeff Bogue, the couple began a beautiful family of six – Josiah, Isaac, Micah, Gabriel, Naomi and Eli. When “baby” Eli was four years old, Heidi began CrossFit in an attempt to reclaim her body and achieve a better level of fitness.  “CrossFit,” shares Bogue, “has been essential in restoring my strength and stamina after having 6 babies in 8 years.  When cardio and low calorie diets failed me, CrossFit was definitely the answer to taking me from a size 10 to a size 2.  But, as with most CrossFitters, I found so much more.”

“Through my struggles with grief after the loss of my mother to melanoma cancer, I discovered a strong connection between my physical output and my ability to connect with my faith and emotions.  CrossFit allowed me to journey through my grief and prepared me to run two marathons on behalf of my mom – raising funds for Jack’s Fund on behalf of the Melanoma Foundation.  I found that the physical results were the initial reward but now my passion for people and helping them with their own transformations fuels me.   In addition, CrossFit has given me lifelong friends and a purpose much higher than setting PRs.”  Coach Heidi Bogue is eager to continue to give back to the community that has given her so much.