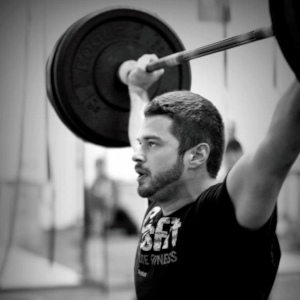 Tom Karos has participated in the Central East Regional both as an individual and on a team.  In 2013, Karos finished in 26th place in the Central East Regional – an amazing feat that puts him in the 99th percentiles of athletes in our power house region.  He also finished 26th in the Granite Games in 2014 and has participated in Hyperfit’s Winter Camp.  Most recently, in 2017, Karos, Fairhurst, and Berger finished FIRST in The Granite Games in Minnesota beating out hundreds of teams to achieve the top of the podium.

Karos programmed for Advanced Performance CrossFit for over three years learning from Coach Doug Chapman at Hyperfit and gleaning from other top programmers.  Karos has been mentored by Coach Chapman as an athlete and has coached WODs and Olympic Lifting Specialty classes for the past 3 years.

In addition, Karos cares for everyone’s fitness progress and is extremely personable.  He served as the Director of Programming for Advanced Performance CrossFit programming WODs and organizing several large competitions with great success such as APCs WOD WARS.

“CrossFit,” states Karos, has given me a sense of community, a way to help others, a platform for athletic performance and a fun way to challenge myself.”  He is excited to be sharing his expertise in his own box, CrossFit HighGear.